For Now, I Choose To Walk

What It Means to Settle

For Now, I Choose To Walk

I started to exercise again.

There, I said it.

It’s been about a year since my boyfriend and I last exercised, since crazy work hours, sleepless nights with a toddler, health problems, and the like started to pile up. Before we knew it, time spent at the gym became a frequent dismissal of: “we’ll go tomorrow, tonight we really need the sleep”.

We’re only a few days in, and I’m sure in about a week I might hate the idea of sweating, swearing, soreness, and the lack of oxygen that comes with our late afternoon regimes, but for now we actually look forward to it. My office job entails that I have to mostly sit all day, and needless to say I started to feel pretty lazy. Before quitting the gym, I used to have a great build. I was fairly strong and fast, and I was an avid gym goer. I used to have the promise of a soon-to-be six pack and killer calves. Now, I slouch. I’d rather sit. I opt for energy drinks instead of the gallons of water I used to down within a few hours of waking up in the morning. While I’m still thin, I lost the definition of muscle that made me proud to wear tank tops and shorts in the summer time.

The night that my boyfriend suggested we go to the gym, I almost didn’t go. When I used to work out, I had shit self esteem and the gym became a source of seeing how far I could push myself until I collapsed. Eventually, I hated that I hated myself so much as to push past my not so carefully drawn limits and exhausting myself to the point where I physically couldn’t do anymore. I used to obsess over results and push myself even harder if I was too exhausted to meet my goals from the day before. I went to the gym 6-7 days a week and stayed for about and hour and a half to two hours every night, no matter how I felt physically. It was stupid and my body could not handle it. After months of essentially going to what I formally referred to as the “torture chamber,” I became too exhausted to keep going at that self-loathing pace and eventually stopped going altogether. When I thought back on it, I saw myself as giving up and instead of the reality, which was that I pushed myself too hard, and set goals that were too high with too little amount of time to reach them.

Blame society’s ridiculous standards of women, blame my mother’s avid and strict dieting plans I saw every day growing up, blame the lack of chemicals in my brain that sometimes make me feel broken. Whatever. It was wrong.

I have definitely and certainly come a long way in a year though, as I have learned a lot of important things regarding who I am and what I’m capable of. I have learned that I’m mentally and physically stronger than I ever could have thought, and that giving up should never be (and never is) an option.

So the night that my boyfriend suggested a light workout due to our recent lack of energy and obvious lack of muscle tone, I laced up my running shoes, and bounded out the door behind him to go to the gym.

Before, the treadmill was my frenemy. I had thought that I loved to run and that I could be really good at it. Sometimes I’d do great and feel amazing after using it, but most times I’d be at the point of blacking out after setting a too high incline and a too fast pace before I even reached a mile. I swiftly started to hate running.

This time, I chose to walk. Just walk.

Not only because I know I’m not physically ready to run yet after taking such a long break and leading a less than active lifestyle, but because I respect myself to know my actual physical limits. Exercise shouldn’t have to be something we dread. It shouldn’t be a form of self-punishment when we don’t like how we look or when we want fast, unattainable results. It shouldn’t have to hurt horribly physically and emotionally when we don’t reach a certain goal fast enough. We should exercise because it makes us feel strong and proud, not weak and worthless, no matter what body type we have.

There’s still a little voice in my head that taunts me to move faster and exercise longer, but I’m stepping carefully onto this path of finally accepting my limits and weaknesses, and knowing that for now I’m not a runner. That’s okay too. I’m not attempting any marathons anytime soon anyway. My life doesn’t depend on whether or not I can run a mile.

I might last a month and write to tell you I’d rather be a lazy writer with a flat butt and a food baby from eating all the pasta and cupcakes known to man. I might make a joke out of my failure, but I really believe I have it in me to reach my goals this time.

This time, I do it with the expectations that every step won’t be perfect and I’ll zig-zag before being able to create a straight line. But this time, I’ll look forward to finding the imperfections that make me human. 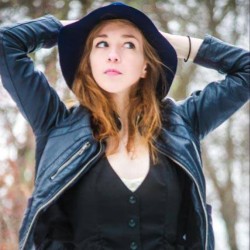 Emily Millman
Emily Millman is a 21 year oldpoet, story teller, inspired optimist, artist, and happiness enthusiast that will make you rethink a thing or two. When she is not studying for college, writing love songs to distillers of whiskey, or chasing her suddenly very talkative toddler around her apartment, she enjoys reading poetry, making to-do lists, and surrounding herself in everything considered a shade of blue.

9 Ways to Eat Healthier Without Dieting